Boston Bruins preview: Will bold offseason decisions cause a setback? 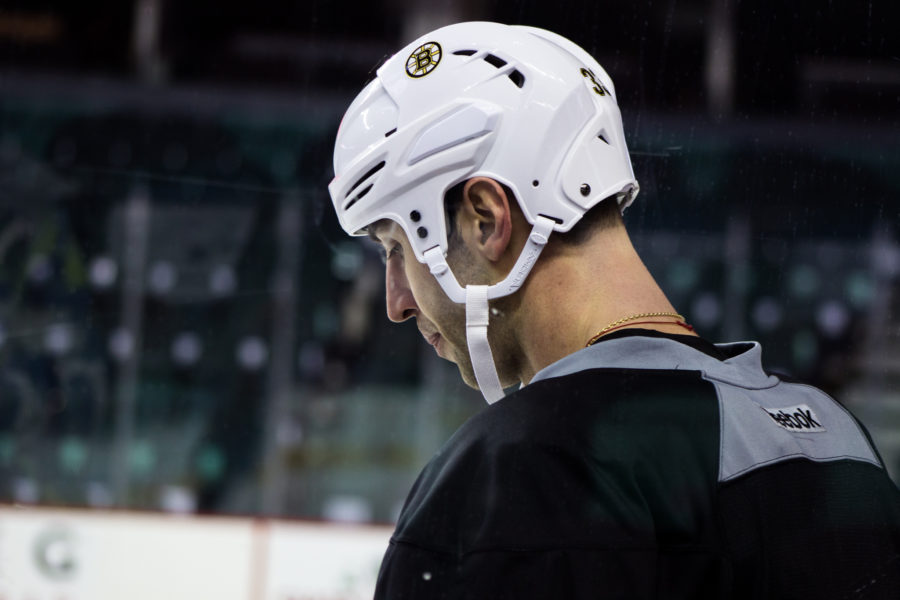 By Ian Kea and Brian Horner

Beyond the doubters, this 2014-15 Boston Bruins squad is potentially a top five team in the NHL and arguably one of the best teams in the Eastern Conference as well.

Even with the loss on Saturday to the Red Wings in a disappointing shootout, the Bruins have learned a lot from this last game and fans should be excited for the future of the team.

Patrice Bergeron will be a colossal goal-scoring asset. With three goals on Saturday night, fans should be hopeful that he will at least light the lamp 25 times and hopefully even match his last season total of 30 goals. Bergeron, with a solid set of line mates by his side this season, will be able to generate enough offense for the entire first line with his number of assists and playmaking ability.

The Bruins first line will consist of the same chemistry they had at the end of last season with Brad Marchand, Bergeron, and Riley Smith staying together.

Smith will also be contributing a substantial amount of assists by setting up Marchand and Patrice Bergeron. This trio will be able to at least muster up their last season point numbers and hopefully more.

They have some complications, especially in the fiscal department, which will not only struggle on the ice but also in the personnel decision room.

The Bruins remain tight on a budget with a small cap space. According to CapGeek.com, the Bruins have $332,524 in salary cap space, which puts them in the seventh tightest cap space out of thirty teams. Conversely, Calgary has the most cap space in the NHL at $15,063,333.

With a tighter cap space, more critical decisions may have to be made for a team adjusting to evolving opponent schemes. Personnel did not resign veteran Jarome Iginla after a 30 goal, 31 assist season last year and wound up instead signing with the Avalanche in Colorado.

As far as the defensive end of the ice, Matt Bartkowski, Kevan Miller, Dougie Hamilton, and Torey Krug are all young, dynamic defenseman who can grow and learn to fill the void that Johnny Boychuk left behind.

All these players possess the physical mentality the team will need and will be able to generate enough points to help give the Bruins an advantage over their opponents. With a total of 89 points between those four young guns, and a little more offensive power, the Bruins can fill the empty space left by veteran Boychuk.

Now that the cap space for next season has been cleared up, as well as the two second round draft picks that were acquired with the trade of Boychuck, the Bruins are looking at not just a successful season this year, but well into the future also.

Bruins defense will not have much to worry about with their net minder between the pipes, Tuukka Rask, the Vezina winner, was off his game Saturday night, however, do not look at that as a preview of the coming season.

Even with five power play chances, the Detroit Red Wings could only score twice on Rask. Even though Rask had a low game with a save percentage of only 89 percent, this is not expected to be a regular occurrence for the star goalie.

With little money, more sacrifices may need to be made beyond the Boychuk trade as well. If midseason moves are needed, it will be even harder for the Bruins to make a play at a possible trade chip. Possibilities to consider even go as far as trading or releasing longtime Boston Bruins defenseman, fan favorite, Slovakian giant Zdeno Chara as he nears age 38.

Although the cap is a large issue of the Bruins, they still maintain a strong cast of players such as Marchand (LW), David Krejci (C), Bergeron (C), Hamilton (D), Milan Lucic (LW) and Loui Eriksson (RW). First team all-stars from last year, Chara (D) and Finnish goalie Rask. Along with a 9.1 percent clip the Bruins will be on target in 2014-15 with consistency and big playmaking abilities from the front to the back of the depth chart.

With the Bruins’ crucial players stepping up into their roles, the team will be a huge threat in the Eastern Conference. Because of a lack of competition, the Bruins managed to steam into the playoffs last season until they faced the Montreal Canadiens. Canadiens could be a threat to the Bruins once again. Also the Stanley Cup runner-ups, the New York Rangers, could be a threat.

Winning the Cup will be difficult with the huge amount of talented teams in the Western Conference such as the Anaheim Ducks and Los Angeles Kings, but the Bruins will not have to worry about them until the finals.

With less competition in the Eastern Conference, look for Boston to take the conference and give Beantown hope by advancing to another Stanley Cup opportunity come spring.