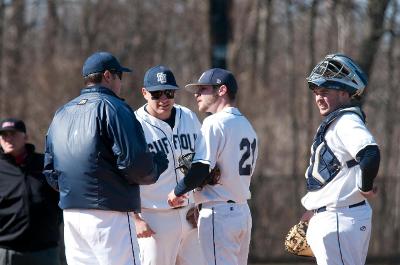 We are at the midpoint of the Suffolk University men’s baseball season and all is well for the boys of Beacon Hill.

Heading into Wednesday’s game versus Endicott College, the Rams are riding a 10-game winning streak in which they have outscored opponents 85-28.

Both the offensive and pitching aspects of this team have been outstanding up until this point of the year and the team hopes they can carry this momentum into the end of the season and beyond.

“The focus of the team and chemistry has really come together over the past two weeks. These things have been definitely a key to our recent success and have directly impacted our performance on the field,” said assistant coach Anthony DelPrete.

The streak began with a 12-10 win in the second game of a double-header against Rhode Island College. The schedule features many weekend double-headers in which the men have performed excellently in past weeks.

After taking care of Salem State to push the win streak to two, the Rams have swept four straight double-headers earning eight wins and doing so in dominant fashion.

The Rams are now 8-0 in conference play and sit atop the GNAC standings ahead of St. Joseph’s and Johnson and Wales.  Suffolk has yet to play either of the two teams behind them and are looking forward to seeing J&W for two games coming up this Sunday.

“We still have some big games ahead of us with Johnson & Wales and St. Joe’s and an improved Norwich team. We’re winning games we should, but the end all goal is to win the conference tournament. Right now we’re just focused on setting ourselves to earn that one seed and put ourselves in the best possible position to get through the tournament,” commented coach DelPrete.

Suffolk has been winning its games by large margins that are credited to timely hitting and solid pitching. Contributions from the line up top to bottom create a balance that most teams struggle to find. This year’s Suffolk team looks to have that balance in its lineup that is coveted by managers.

Coach DelPrete mentioned some players who are making an impact that are not in the top part of the order.

“JC Collette and Rob Marks have given our lineup a big boost at the bottom of the order. Anytime you get key contributions from guys hitting down in the lineup it makes it that much deeper and tough to pitch too. The guys up top, Ronchi and Jacobson have been doing a good job setting the tone.”

All Suffolk can continue to do is play solid baseball and lock up the GNAC title and look to play into the summer. This is a talented team with great leadership in the dugout and on the field. This team has high standards and has set lofty goals, which they hope to achieve in the weeks ahead.

Assistant Coach Del Prete gives us insight on the message the coaching staff is sending its players.

“Right now the key to staying on track is to just take it one day at a time. We’re currently at the halfway point of the season. The first quarter we struggled and over the second quarter we improved. The next quarter pole of the season will really be a good litmus test for us where we stand. We have the top two teams in the conference from last year with JWU and St. Joe’s and some good non-conference games ahead (Bridgewater St., Endicott, Babson, Eastern Conn. State) so the goal is really trying to improve on a day to day basis and be playing our best baseball come tournament time.”