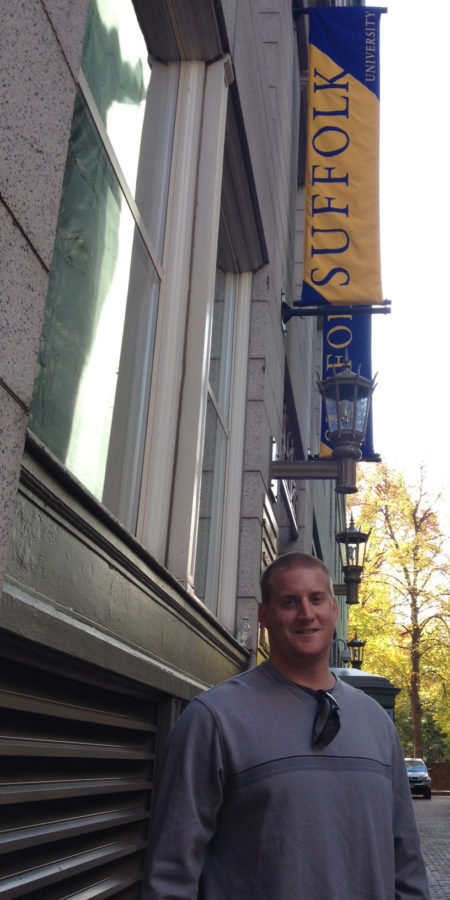 Erich Kirchubel grew up knowing that he had a passion for traveling and serving, and in 2005, he joined the United States Air Force. Currently a first year student at Suffolk, Kirchubel shared his journey in the military as well as his transition back to the civilian world in an interview with The Suffolk Journal on Veterans Day.

“I spent eight years in the air force,” Kirchubel, a 26-year-old southern California native said. “I lived in Virginia for three years and England for four-and-a-half-years.”

Kirchubel worked as an air craft mechanic while in London, where he performed service and inspected the airplanes and helicopters used for missions, specifically electrical problems in the planes.

He also served in four deployments during his years in the military, the longest one lasting almost eight months. Areas that Kirchubel served in include Afghanistan, Korea, and Italy.

“I got out last July. I was really ready to go, get back to the civilian life, and get an education. I am using the G.I. Bill now, which helped me get my tuition paid for.”

In addition to that, Suffolk University’s Yellow Ribbon program helped Kirchubel ease his transition back into education. Yellow Ribbon began granting veterans up to the full cost of tuition, fees, and books in 2009. While the federal G.I. Bill provides good financial support, the amounts granted do not always cover the full price of college for the veterans, so Yellow Ribbon makes it more accessible.

The university also offers a Veterans Upward Bound program that “offers free services to 120 low-income veterans from the metropolitan Boston area who are the first in their families to pursue a college education,” according to the school’s website.

“My goal when I went into the Air Force was to stay all 20 years, get retirement, and while I was in it, to go to school,” Kirchubel said. He explained that there are a number of schools, like the University of Maryland, who have campuses on the bases available for all who want to attend. “I always felt that I needed an education, but my job at the time did not allow me to.”

Kirchubel tried online classes while working for a few months, but then stopped after complications with his schedule. It was not until he left the military that he decided to enroll full-time to get a four-year degree.

“I chose Boston to try something new. I have been to most other parts in the country, but never the Northeast. Also, my wife didn’t mind, so why not? Suffolk was the best option for me, and I like big cities.”

Kirchubel shares that he is pleased to finally have the opportunity to get an education, especially with the benefits that are extended to him.

“It’s great…It is definitely a big schedule change. I have a lot more time on my hands now and it is a lot less stressful than living on a base,” he said. “I think having the military experience has helped me handle this better because I see others really stressing about school, while for me this is a couple steps down from what I am used to.”

His major is international affairs, and after graduation he hopes to work for the government, such as consulate work, which may involve traveling.

Kirchubel advises other veterans considering going back to school to analyze their own goals and see what is the best path for them.

“Everyone has their own situation,” he said. “If they are very happy in the military, then they should pursue online education, and not a four-year college. It is a big transition, regardless of how simple the government makes it, it’s huge. I would say as long as you don’t mind being a 26-year-old surrounded by a bunch of 18-year-olds, then you’re all set.”

Kirchubel emphasized that education is increasingly important, including for those in the military.

“It’s important for people to pursue an education as far as they need to or can. It makes it easier to advance in life.”