Freedom of expression: to whom does it belong? Persecuted dissidents participate in Ford Hall Forum 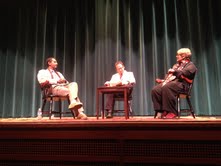 The First Amendment of the American Constitution states that there can be no law made against exercising freedom of speech, religion, and the press. The amendment also protects the right to peacefully assemble, and to petition the government.  These basic rights give us confidence in developing, practicing, and speaking out about our beliefs. This is not the case in countries like Iran and Ethiopia, where the panelists of “Scholar’s Rescue,” the most recent Ford Hall Forum held on Oct. 24 at C. Walsh Theatre, hail from.

The Scholar Rescue Fund is designed by the Institute of International Education to help professors, scientists, researchers, and writers in any part of the world that are being harassed, arrested, tortured, and possibly killed. It provides threatened scholars protection and financial support at safe academic institutions all around the world. It promotes freedom in intellectual thought and expression.

Alemayehu Weldemariam is a native of Ethiopia. He is a visiting scholar at Suffolk University and a Scholar Rescue Fund fellow. After an interview with Ethiopia’s largest newspaper in which he offered his intellectual analysis of the then-current state of Ethiopia’s economy, Weldemariam was threatened by the Ethiopian government. He was quoted in the publication as saying, “Unless the Army stages a coup, I see no future for [opposing] political parties.” Weldemariam was not allowed this sort of intellectual analysis, at least in public. Some time later, he applied to participate in a program similar to the Scholars Rescue Fund, and that is how he ended up being involved with them.

“If you are in a place where the regime in power is convinced you are a terrorist, [then] you have no option,” he said. The option he was referring to was the option to keep exercising intellectual thought and expressing his views, or keep his political and social opinions to himself.

Mahboubeh Abbasgholizadeh is an Iranian women’s rights activist and member of the Stop Stoning Forever campaign and the Iranian Women’s Rights Charter movement. She became involved with the Scholar Rescue Fund after being jailed several times due to her political activism, and subsequently losing her right to legally work in Iran.

“Because I’m Iranian and a women’s rights activist, I was arrested because of my activities and demonstrations… They preferred me to talk [about the rights of women] from the secular perspective, not the Islamic perspective.” Mahboubeh cites access to media as helping her greatly in her activism, although mainstream media sometimes worked against her. “As we searched for ways to produce our own content on our own TV channel, radios, podcasts, and broadcasts, the mainstream media changed the framework [and therefore the] context of our work.” It became increasingly difficult for her to express her opinions.

Both scholars are intellectual leaders in their home countries, but make it a point to separate themselves from being politicians. They both believe that as academics they should have the right to express their intellectual thought. Weldemariam says that for him to go back to his country the regime has to live up to its constitutional promises of civil liberty and press freedom. He mentioned that there are currently more than 13 journalists in prison for publishing opinion pieces.

The event was moderated by Dr. Nir Eisikovits, director of the graduate program in ethics and public Policy and associate professor at Suffolk University. His humor and insight contributed nicely to the conversation.

“You make people well off in the economy and they stop caring about free speech,” he said. Perhaps this is because injustices don’t amount to as much in the face of making money. He used the Russian economic model as an example. To this, Abbasgholizadeh said, “We are taught that any kind of reform is not sustainable.” The only reform worth mentioning is economic.

Eisikovits also cleverly cited W.B. Yeats in saying that if “‘poetry makes nothing happen’ why is it that a Scholars Rescue Fund exists rather than, say, an Entrepreneur’s Rescue Fund?” To that, Abbasgholizadeh asked, “Why not? What scholars bring into this nation is invaluable, and great contributions can be made.” Weldemariam said that he wishes to take what he learns here and bring it back to his own country.

The theme of the evening was the scholars’ right to express and their political opinion. Weldemariam’s cheerful disposition accompanied with Abbasgholizadeh’s mild approach and Eisikovits humorous and insightful commentary all made for an interestingpanel.