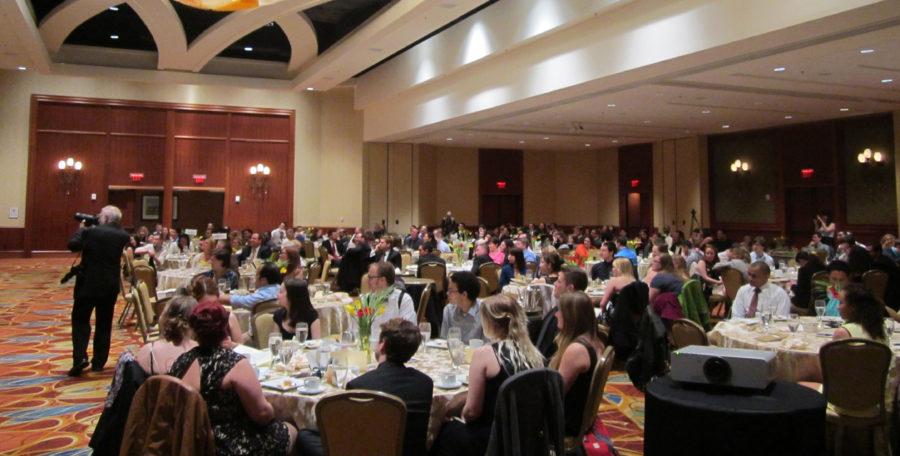 On Wednesday, April 10, 2013, members of the Suffolk University community, ranging from students, to professors, administrators, coaches, and other staff members, joined together at the Marriott Boston Copley Place to celebrate the achievements of Suffolk students with the annual Suffolk Student Government Association (SGA) Leadership Awards.

Starting at 6 p.m. with light drinks and refreshments provided on the lower floor with an impressive performance from Rhythm, one of Suffolk’s student music groups, the university community gathered to begin a celebration that is held towards the end of each spring semester.

Corinne DeCost and Ashley Niemiec, who are both sophomores, hosted the ceremony which began around 7 p.m. and lasted almost three hours. The crowd, estimated in the hundreds, sat at tables in a big room on the third floor of the hotel located just a few blocks from the Prudential Center.

DeCost and Niemiec, who are also members of Suffolk’s Sketchual Misconduct, kept the audience entertained and amused throughout the show. Other talented student groups performed for the crowd, including two songs by the Ramifications and another hilarious improv skit by Seriously Bent. Students who attended were quite impressed with how the ceremony went and thoroughly enjoyed themselves.

“The best part,” she said, “was watching how happy each award recipient was as his or her name was called.” Pierre-Vil has attended the SGA Awards since she was a freshman, and even served on the committee her freshman year.

When asked if she was ever nominated, and what for, Pierre-Vil explained she was nominated last for both Junior of the Year and College of Arts and Sciences (CAS) student of the year, and she ended up winning Junior of the Year. She added that the “Suffolk community did nominate me this year for both Senior and CAS student of the year but I wanted to play a more active role in the awards so I asked to be removed from the running.”

Preparation for the event, as you can imagine, took quite some time. Pierre-Vil said that SGA began planning this year’s SGA Awards ceremony in the fall and in the spring time they met on a weekly basis.

Pierre-Vil, a student who will be joining her fellow seniors at graduation in a few weeks, also added that she “would like to thank everyone who helped make this night a success and congratulate all the nominees and recipients.”

Alyssa Perry, a freshman and SGA senator for the class of 2016, also attended. Perry said she went to the award ceremony because she was nominated for Outstanding Freshman of the Year (although she did not make it to the final rounds) and also because she is an SGA senator.

“The best part about the awards,” Perry explained, “was the improv group, they did an awesome job of acting and keeping people entertained.”

William “Billy” Cerullo, former SGA senator to the class of 2014 and newly elected SGA President for the 2013-2014 school year, took part in the official Passing of the Gavel, where Pierre-Vil handed over power to the student succeeded her as president.

Cerullo said thought “there were many great aspects of this year’s SGA Awards Ceremony, it’s hard to pick just one. Two things that I do love about the awards, and that go hand in hand, are the camaraderie and the recognition of leaders around campus.”

“I think it is important to recognize the hard work of students, organizations and faculty around campus,” he said. “It serves as a reminder of the amazing individuals within the Suffolk community. Even further, it is great to share all of the amazing successes that we have had over the year.” This is Cerullo’s second year in SGA, but this was his first time going to the SGA Awards Ceremony.

Suffolk’s new SGA President also said that he was nominated for Outstanding Sophomore last year, and was nominated this year for Outstanding Junior and Unsung Hero. Cerullo mentioned that the “awards night is a great example of how anyone can be involved on campus and become a leader thereafter. I truly believe that it is important for students to become involved on campus.”

During the ceremony, there was also a silent auction fundraiser where all proceeds went to a charity. John Silveria, faculty advisor to Suffolk SGA, gave the closing remarks. 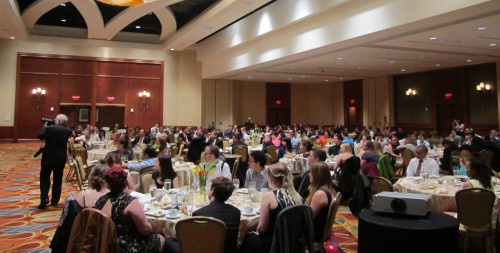